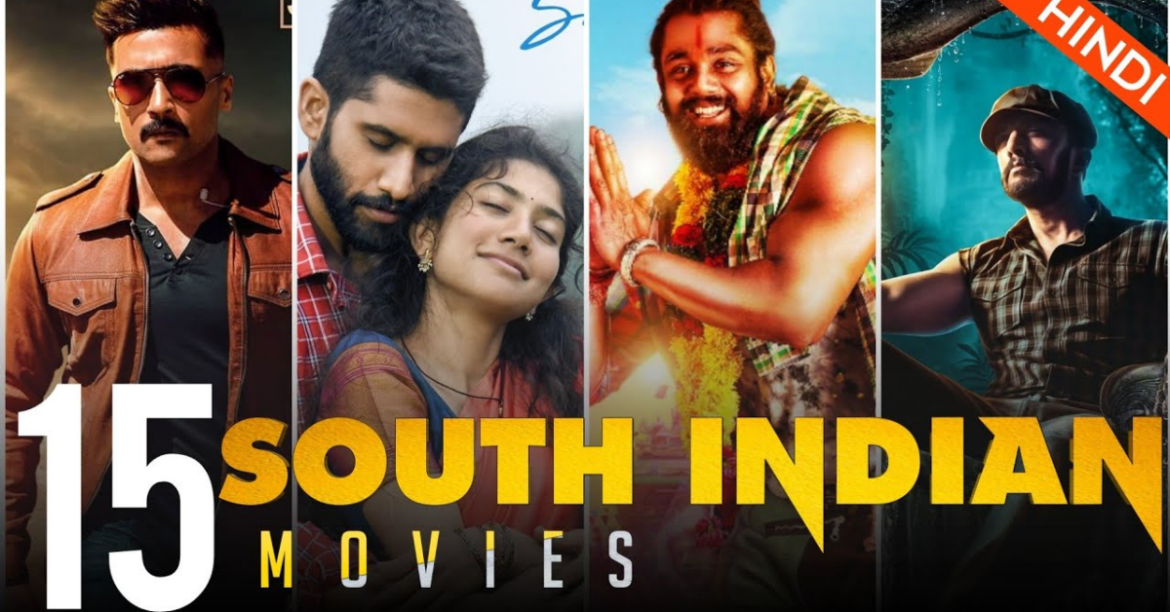 2021 is propelling forward to watch the masterpieces of many versatile actors and talented filmmakers from the assorted pool of action, thriller, mystery, crime and romance genres. Amidst the COVID-19 situation, watching south indian movies at home seems to be the best idea right now. And we don’t want you to be on your heels to get the list of the upcoming South Indian movies Hindi dubbed in 2022.

Upcoming South Indian Movies 2022 That Are Hard To Miss By

So, here are the most awaiting top 9 South Indian movies to look forward to.

KGF Chapter 2 is one of the highly anticipated movies which is been waiting for a long time to release. Previously it was marked for the movie to get released on August 22, 2021, but due to a pandemic outbreak, it will get released on April 14, 2022. The story of the movie is based on the life of the protagonist Rocky played by rocking star Yash. He is having an outburst of ambition after losing his mom at a young age. He went to gold mines in Kolar to gain control. The sequel is entirely based on the clash between Rocky and Adheera.

Ponniyin Selvar Part 1 is one of the most expected historical movies directed by Mani Ratnam. The movies are being released under the banner of Madras Talkies with the Co-production by Lyca Production. The music which is being composed in this movie is done by AR Rahman. The cinematography is being done by Ravi Varman. The movie is being released on April 28, 2022, which is the first part. According to reports, the second part is going to be released at the end of 2022.

This is one of the highly anticipated upcoming projects of legendary director SS Rajamouli. Film RRR is one of the most anticipated Baahubali. It is starred by Jr NTR alongside Ram Charan. The movie is based on the fictional story of two legendary freedom fighters. The movie was set in 1920 about the freedom fighters Komaram Bheem and Alluri Seetharamaraju. Ajay Devgan and Alia Bhatt will also have important roles alongside high-end South Indian actors.

Pushpa The Rise is being released on 17th December 2021 all over India. The story is based on the rates and the smuggling in India. It is from the point of view of a lorry driver in the Seshachalam forest in South India. It is one of the well-received movies in India. It had a controversial scene that was cut off due to nudity. It is an action-packed film with multiple controversial plots all over the story.

Jai Bhim is considered as the Indian phenomenon would be the highest rated movie in IMDb. The plot of the movie is based on an actual case fought in real life by a retired Madras High Court judge. During the time he was a lawyer and it is about a family belonging to the Irular tribe. The particular family was trying for custodial violence which is entirely based on their caste.

Touted as one of the most awaited superhero movies in the Southern region of India, Minnal Murali is going to hit the theatres in Pan India by 19th August 2021. Directed by Basil Joseph, Minnal Murali casts some of the best Malayalam actors including Tovino Thomas, Aju Varghese, Harisree Ashokan and Guru Somasundaram in pivotal roles.

The main protagonist of Minnal Murali is Murali himself, played by Tovino Thomas, who hit by lightning and eventually gets his superpower to run like the lightning on the same day.

This big-budget film is decided to be released throughout all Indian states. Minnal Murali is going to be the second collaboration of Tovino and Basil after the wrestling-based drama- Godha.

Marakkar: Arabikadalinte Simham yet another magnum opus masterpiece from the bag of Mohanlal and Priyadarshan, is making headlines for its whopping budget scores – Rs 100 crore. This is an epic war movie, loosely based on historical facts and events, is thus set in the 16th century. It was earlier scheduled to be released on March 26, 2020, but got delayed due to the Covid-19 pandemic aftermath and now if believed to the buzz going around, it is going to be released on 13th May 2021.

With an astonishing 16th century backdrop, the movie will focus on the gallantry of Kunjali Marakkar IV (played by Mohanlal) aka Mohammad Ali in the Priyadarshan project, the naval admiral who courageously defended the Malabar Coast from the invasion of the Portuguese army.

Save your favourite couch spot to watch the movie as it is really going to be an edge-of-the-seat kind of experience throughout the scenes. Steered by Tamil heart magnate, Vijay, the role of ‘John Durairaj’ in this movie will be a treat to your eyes. Apart from Vijay, there are other notable actors such as Vijay Sethupathi, Malavika Mohanan, Arjun Das and Andrea Jeremiah in Master.

This anticipated action-thriller is releasing on 13th January 2021. Master is an action film from Tamil Film Industry, India, unfolding the events that happened in the life of a professor, John Durairaj. He was sent to teach at a juvenile reform school for three months but ended up clashing with an unscrupulous man, Bhavani who used to control all the criminal activities behind his white-collar image through the school.

If Fahadh Faasil’s C U Soon was a jaw-dropping experience for you, then be ready to be flabbergasted with his yet another movie, Malik. Amazingly directed by Mahesh Narayanan, the movie features many notable actors like Joju George, Nimisha Sajayan, Dileesh Pothan, Maala Parvathi and more. As revealed, this movie is all set to release on 13th May 2021.

The paramount plot of this thriller movie is to address the issues of land acquisition. As said in a report in The Times of India, “At its core, Malik is a political thriller. The story is relevant because, in Kerala, there has been an increase of land acquisition cases, especially in sensitive coastal areas.” The pivotal character- Malik is helmed by Malik is played by Fahadh Faasil and helmed by Mahesh Narayanan. The story is about a young man who rises through the unwavering fight against police and political corruption in his village.

The eponymous role played by Dulquer Salmaan, ‘Kurup’ movie is based on the true events of Kerela’s real life criminal- Sukumara Kurup, who committed heinous crimes in the 1980s. The cases are still opened and as shown, this notorious criminal is still on the loose.

Directed by Srinath Rajendran along with Vini Vishwa Lal, Kurup is going to give perspiring moments through its cinematography and story to its fans and audiences. The ubiquitous influence of this movie can be experienced in as many as five languages (including Hindi). With the new teaser on March 26, it is indicated that Kurup will be released on 28th May 2021.

Radhe Shyam is one of the most anticipated south Indian movies of 2021 from Bahubali’s superstar-Prabhas. The producers (including T-Series, Bhushan Kumar) of Radhe Shyam have unwrapped the teaser recently on Valentine’s Day 2021, which became the sweetest treat for fans. From the first day of the movie’s announcement and sharing of the movie poster by Prabhas, fans are going cray with the updates. The latest buzz is that due to the Covid-19 upsurge, Pooja Hegde said ‘No’ to post product shoots, delaying the release date.

Radhe Shyam starring Prabhas and Pooja Hegde as leading actors, set in the backdrop of Italy and Georgia. As showing in Bookmyshow, it is all set to release on 30th July 2021. Radhe Shyam is an entertaining period romance drama and will be released in both Telugu and Hindi languages.

Hold your popcorn as the whistle-worthy movie – The Priest is on its way to entertain you in Malayalam and Hindi language as well. Directed by Jofin T Chacko, ‘The Priest’ is a Malayalam mystery thriller movie, starring Mammootty, Nikhila Vimal and Manju Warrier among others. The very first teaser and poster shared by the production team have already stirred up a storm among fans on social media. Due to the pandemic, the movie has experienced a long delay of one year.

With heavy dialogue punches and an intriguing story, Mammootty plays Fr Carmen Benedict, a priest who has an eye for criminal cases and a sense for the paranormal. Be ready to get a handsome amount of plot twists and surprises, making it great stress releasing the movie for thriller fans.

If you have seen Drishyam first chapter, then you already know the impact the makers of this movie can create. The production team of Mohanlal’s much-hyped thriller drama Drishyan 2 has decided to release the movie on the Amazon Prime OTT platform. If the surrounding buzz is right, Amazon Prime has bought the movie right for a whopping sum of 30 Crores.

The blockbuster hit Drishyam from Jeethu Joseph(director) and acted by Mohanlal is now returned with Drishyam 2, an equal mind-boggling entertainment punch.  The teaser of Drishyam 2 has already instated its position as the next super hit with more intense drama, action and thrill.

The story has taken place roughly six years after the events of Drishyam with the same casting and director. We have to now see if Georgekutty can succeed in navigating his family’s fate through the re-investigation case of the previous horrific incident.

Netflix’s another said to be a huge showpiece, Irul has been released on 2nd April 2021. This recent release has gushed up several thoughts, tweets and diversified critics from various minds in India and foreign lands.

The film is directed by Naseef Yusuf Izuddin, marking his directorial debut. Irul is a psychological mystery movie playing around three protagonists, Archana Pillai, Unni and Alex Parayil, acted by Darshana Rajendran, Fahadh Faasil and Soubin Shahir respectively. It is a perfect thriller watch to keep the viewer at the edge of the seat, letting him/her guess the next turn or twist.

Apart from heavy VFX usage and magnum opus budgets and stunning backdrops, the South Indian movies have always tilted our heart with pride in International Cinematic shows. And the list is exhaustively huge! Do watch the mentioned South Indian movie industry masterpieces and mention those, which you think ought to be nominated here.