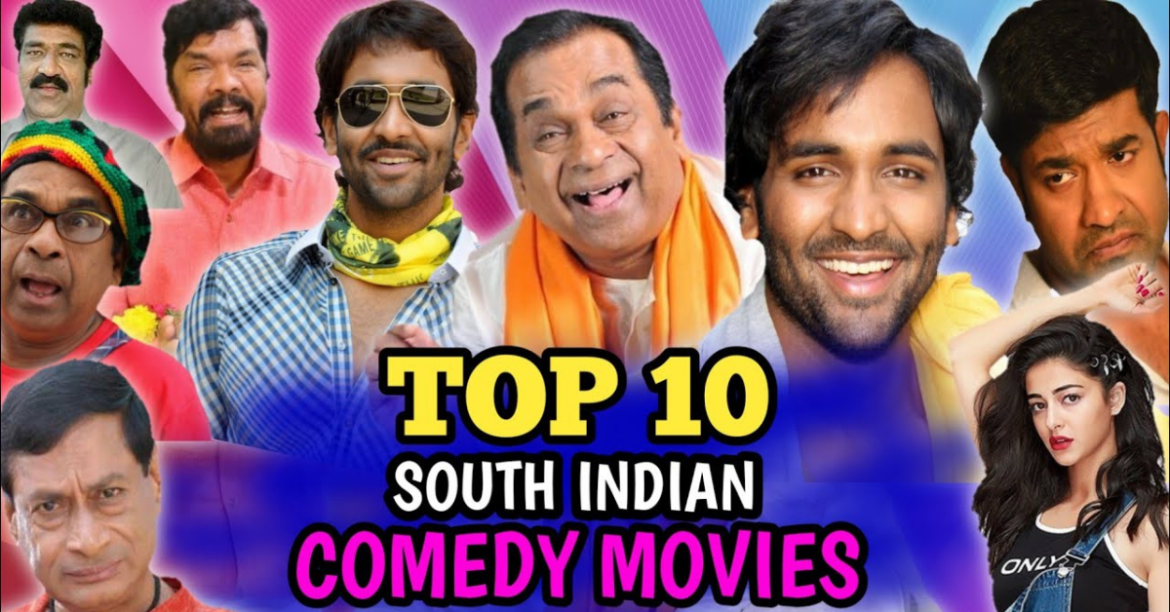 Watching Indian movies gives a new definition of thrill and twists to your cinematic experience. Apart from Bollywood, South Indian industry mass produces movies or films that have garnered not only national but international appreciation as well. Be it Tamil, Telugu, Kannada, Maratha or any other Dravidian group movie, it has always served well-demanded entertainment o its targeted audience. Many such movies are critically acclaimed, many have proven to be blockbuster hits and many movies’ storylines have been adopted by Bollywood movies.

Why is such high demand for the best comedy South Indian movies dubbed in Hindi?

Well, a South Indian movie is a fun pack of all the necessary cinematic experiences: Action, comedy and drama. There is an exhaustive collection of South comedy movie list, available with Hindi dubbing as well to get a maximum reach of the audience in India. South Indian movies are not only favoured in the South but Bollywood lovers are also raising the high demands of its variety.

Actors like Allu Arjun, Mahesh Babu, Joseph Vijay, and Ram Charan not only make the audience swoon over their brilliant acting (and of course looks) but make them guffaw at famous comedy scenes!

So, we have accumulated the best comedy South Indian movies dubbed in Hindi for your weekend binging. And we promise you would knock us for more.

The story is about NRI medical student who falls in love with vivacious Bhanu. Initially, they fall for each other, but their differences create complications in their life. The movie is entirely about two lovers overcoming their differences to get united. Along the way, several romantic actions and comedies are going to entertain the audiences. This movie got released in way back 2019 and still, it is one of the best watches. The movie stars Vandana Chopra, Aayush Kuthiala, and several others in combination.

Sailaja who is the lover of Seenu was being kidnapped by her criminal father. He wants her daughter to get married to the son of CM for their business gain. For rescuing his lover, he gets involved with the local goon. This complicates things and up to something comedic along with action scenes. The movie is starred by famous stars and dubbed in the best possible way with proper translation. This film gets released in 2015 and its original title is Mogudu in Tamil.

This movie was released in 2015 and dubbed later on for the rest of India. The plot of the movie starts as Gopala Rao being an atheist finds himself in the middle of a crisis. Once Govinda Hari visits him, his entire life changes at a drastic pace. It is one of the comedy-focused movies along with drama to stick around to. The movie is having skilled big south Indian stars, so you are in for a treat.

This movie got released in 2016 and it is one of the highest-rated comedy movies. This film is all about an attempt by Sunil the protagonist to repay a kindness that earns him the wrath of a ruthless gangster Kabir Duhan Singh the antagonist whose wish is to continue his all-illegal proceedings. This is one of the musical experiences with good quality acting to look into.

This movie was released in 2014 and is one of the delightful to watch in my free time. The story of this movie starts as Naidu confronts his son’s rival group to end their squabbles, he encounters their mother Satya, his long-lost love, separated by the twist of fate. As Honey learns the secret between Naidu and Satya, she is kidnapped by her father’s arch rival Suyodhana Goud, who sees an opportunity to unwillingly ensnare her into a marriage with his son. Although these unfortunate turns of events bring Naidu, Satya, and their sons together, they must devise a clever escape plan for Honey.

Using a handful of diverse characters and linked with extraordinary situations, interlinked with one another, Maanagaram (Dadagiri 2) is a movie from kaleidoscopic genres – thriller, action and comedy. With such a high capacity to capture South Indian comedy movie fans’ attention, this movie has simply topped our ‘South comedy movie list’.

Lokesh Kanagaraj, the director has also used striking touches of humour and nail-biting tensions that will make you roll on the floor with laughter and then keep you on heels on the other moment.

The film is a romantic comedy movie, where the protagonist is an absent-minded plant scientist. He has inherent memory related issues, which he tries best to veil over from a girl he loved.

My Name Is Lucky was a blockbuster hit and success and garnered positive reviews from critics and audiences as well. This is a Telugu film, which is then remade in Kannada and Tamil language. As one of the best comedy South Indian movies dubbed in Hindi language, it was presented to a wider mass after five years of its original release. This piece is a must-have in your South comedy movie list if you wish to flaunt your cinematic critic IQ among your peers.

Many movies arrive with dreams of hitting the emotional stream of audiences but “Comali” hit both heart and mind at the same time. It is a time-traveling south comedy movie but without any usage of time travelling machines but emotions that people once valued and now lost.

Our main protagonist of the story was in a coma and woke up after 16 years. This huge shift of time created a mental void in his character.

The main hero of “Anando Brahma” or Kanchana 3” is the script and of course the lead character, played by Taapasee Pannu. Many reasons made it top our ‘South Indian comedy movies’ list.

One of the most intriguing factors of this movie is the concept that ghosts can also be scared of humans. From witty dialogues to a gang of revered comedians from the South Indian film industry, this movie is a must watch if horror-comedy is your genre or you wish to give it a bite.

The producers and the cast have made tremendous strides with the exciting and enthralling story and acting of all. In nutshell, this movie has beautifully put one of the famous ‘Turtle and Hare’ race stories from Panchatantra onto the canvas. With many sweet and sour punches of comedy dialogues, this is one of the best South Indian comedy movies worth watching this weekend.

Well, we are still catching up with the modern or say western theory – “every person has the right to choose its own life partner, regardless their status, class, ethnicity or race.” Brand Babu is a story of a Richie Rich guy – Diamond Babu (debutant Sumanth Shailendra) and his startling love story with Radha (Eesha Rebba), his home maid.

Packed with sometimes cringing yet ROFL dialogues, this South comedy movie is a good shot to try.

Many popular actors are roped in for Jeene Nahi Dunga (Daruvu) such as Taapasee Pannu, Ravi Teja, Prabhu, Sushant Singh, Brahmanandam and Avinash Yelandur. “Daruvu” is an Indian Telugu language movie, released in 2012; later, it was released as one of the best comedy South Indian movies dubbed in the Hindi language in 2013. As a typical Ravi Teja movie, this presentation is also packed with action and a lot of comedy, with several witty twists and turns, making this South comedy movie a perfect weekend binge piece.

Get ready to get swooned when watching Brother’s Day, an Indian Malayalam film. Cleverly written script with a lot of comedy punch lines, some deliberately emotional juices here and there and “Brother’s Day” is hot and ready from the oven to be watched. The revolves around the two characters Ronny and Chandy. Unexpected series of things happen between the two of them when the latter reveals its true identity.

Well, set your back straight and get ready to enter a ticklish labyrinthine maze.

This one is truly a bonus trip for Vijay’s fans!. Although the story doesn’t offer much, this comedy action movie has strings of perfect timing for comedy lines. That can set your mood to hearty chuckles throughout. If you are searching for the best comedy South Indian movies dubbed in Hindi, this can be counted as one of the classics.

You can delight your adrenaline senses by watching skyscrapers throughout the reel, Vijay ditching bullets, and crackling fun at many times, “Kuruvi” or “Jo Jeeta Wahi Seekander” (Hindi dubbed name) has everything to send south Indian comedy movies’ fans into raptures.