Skip to content
Home » BEST CHINESE MOVIES OF ALL TIME 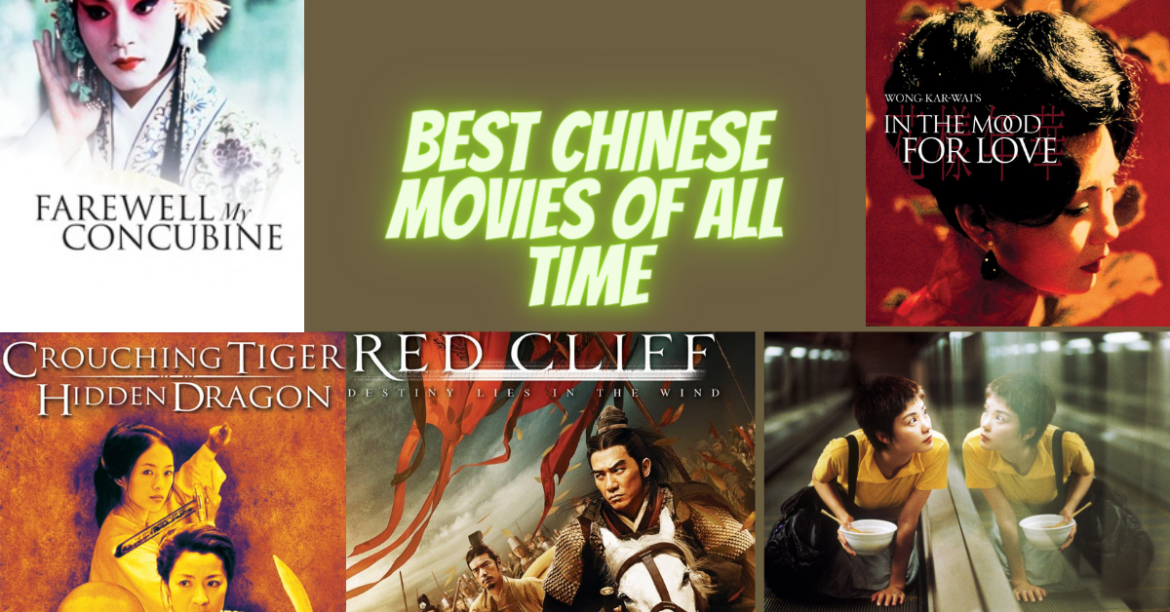 In this disquisition, we are going to see about the best Chinese movies of all time. Asian countries are not only good at tourism but also on the big screen. They have a unique talent in filmmaking. Chinese movies also play an important role in Asian as well as world cinema. The Chinese filmmakers are experimenting with different formats and producing unique new works from other filmmakers. This is one of the reasons why the Chinese movie industry is growing so rapidly. Hence, most Chinese movies are being dubbed into Hindi for wider reach.

Here you can see some of the best Chinese Movies.

This Romantic movie takes place in 1962, between Tony Leung and Maggie Cheung as lead. Chow Mo – wan, a journalist and his wife Mrs. Chow moves into a new building in Hong Kong. At the same time, Su Li -zhen , a secretary with her husband Mr. Chan also moves into the same building. Mrs. Chow and Mr. Chan always went to overseas for their works. So, their partners are always left alone. Then both Mr. Chow and Mrs. Su individually come to realize that their spouses are having an affair as everything happens coincidence. They clear understand that they are betrayed. So Mr. Chow and Mrs. Su begin spending time together as friends. But soon, both are falling in love with each other. Then they decide to split up. The plot is really interesting that the audience can feel like the two characters as their close one.

Farewell, my concubine is a historical movie based on a novel by Lilian Lee. This movie is so discussion about prostitution and then theater and how it is removed from the real world. In 1924, a prostitute with her son Douzi (Cheung) searches for an opera House in Peking for her son’s training. But no one included him due to his sixth finger. So, the prostitute cuts Douzi’s finger in order to get a seat. Then he begins his training in Peking opera House along with the older boy, Shitou ( zhang). Both become friends and they also play the opposite gender lead characters. Douzi, somewhat a girlish guy who plays a female role and shitou as male both build deeper emotions, in reality, more than a reel. But they control it due to Chinese tradition. By 1937, when Japan invaded China, Douzi has a wealthy supporter while shitou marries a prostitute. For 50 years, the two men maintain a problematic friendship as china undergoes tempestuous changes. This movie depicts the relationship between two men and the Chinese culture in detail.

In 1920, Songlian, a nineteen-year-old girl lives in China. At that time her father dies due to an accident. After the death of his father, she is forced to marry a fifty-year-old man, Master Chen. He is already married thrice and songline is his third concubine. This plot explains the competition between the concubines to seek the attention of the master to win more money and things as he is rich. Every night, master Chen has to decide with whom he spends his night and a red lantern. But then things get out of hand after the concubines start quarreling among them. Zhang Yimou attracts the audience by using the title of the movie as a symbol. Like the master Chen carrying the red lantern in his hand and then he chooses the concubine standing in front of their room with a red lantern. This is considered the main action of the movie.

This Romantic comedy consists of two stories of Hongkong cops, Takeshi Kaneshiro as He zhiwu and Tony Leung as cop 663. The first story deals with cop 223,He zhiwu. On April 1, 1994 his five years girlfriend breaks up with him. He purchases a tin of pineapple juice with the expired date of May 1 as he regains his love or that will expired forever. Then he instantly attracted to the blonde-headed woman, who is a drug dealer. The second story deals with cop 663, Tony after his break up with his flight attendant girlfriend. Faye, the young woman is in love with cop 663, she helps him to get over his sadness. He realized that she loves him and after some incident, she leaves Hong Kong. After one year, she returns to Hong Kong as a flight attendant. Then cop 663 shows her a boarding pass that she left a year ago, it is distorted now. He asks whether it is accepted or not she said no and tells him that she gives a new one. Then she asks whether he wants to go with the boarding pass, cop 663 replies he wants to go wherever she wants to take him. The director of the movie gives a good tone of romance with two different stories.

This movie takes place in the 19th century, during the Qing dynasty. Master Li Mu Bai, the great warrior decides to give his four hundred year old Green destiny sword to his friend Yu, whom he loves more. But one day, the sword is stolen by a young female warrior and she takes it to the place of her romantic adventure. At the same time, master Li also tries to take revenge on the evil lady Jade fox, who kills his master. He then joins with Shu Lin, the lovable one of his life in search of the great sword. Then they searches together, but it is more of romantic than a action movie. Finally, at the end Master Li Mu Bai confesses his love for Shu and dies in her arms. Then Shu tries to attack the young female warrior but stops and asks her to leave the place and continue her romantic adventure. Then Shu picks up the Green destiny sword and gives it to Sir Te. Thus the director fuses both the romance and action in this movie that attracts the audience.

In 1940, in Shanghai, a gangster wants to join a dangerous gang called ‘Axe gang’, which currently rules the town. So, the gangster and his friend live in the slum telling the slum people as they are the members of axe gang. The slum, Pig Sty Alley which is under the control of the landlord and his wife’s landlady who are really kung fu masters. But the gangster’s action made the axe gang to engage in kung fu battle. Danny Chan is the head of the axe gang. He tries to occupy the slum but the landlords using their tricks made them fail so they both become enemies. Then Danny chan asks for help from the beast and joins the gangster in his gang to oppose the landlords. During the battle between the beast and the landlords, the gangster supports the landlords and three of them escapes from there. As the gangster injured, they give treatment to him in the slum. Then the beast who is ferocious kills Danny and comes in search of the gangster. The beast finds him and they both start the battle, the gangster is nothing other than the master of masters, at last, the beast bows to the gangster and begs him to become his follower. This movie fills with comic elements over action and entertains the audience.

This movie takes place at the end of the Han dynasty. The torpid and avarice prime minister Cao Cao tells the emperor Han the only way to unite all the three kingdoms in China is to declare the war on the kingdoms of xu and east wu. Cao Cao builds an army of one million soldiers and attacks Liu Bei. Zhuge Liang his advisor and the war man heads to the south in a mission trying to convince Sun to join forces with Liu Bei against the strong warhead. When Zhuge Liang meets the Royal representative Zhou Yu, he succeeds in his determination with the team of the two kingdoms against the hot-headed minister Cao Cao. There are more battles, they fight against each other until the final war. The final war takes place in Red cliff where deception, wisdom, and war tactic transcend. During the battle, more than two thousand ships were burned and many lost their lives. Thus it is one of the historical movies filled with battle and action is the major theme.

These are all some of the best movies in Chinese language. Similarly, there are many more films in Chinese, where the filmmakers inserts their intellect and imagination into it and creates the best one.